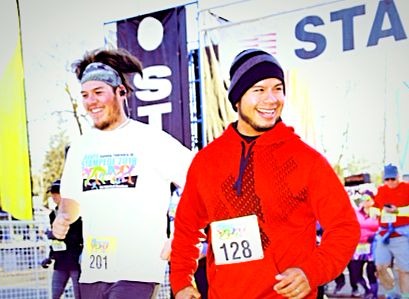 It all started with the Davis stampede on February 18, 2018.
We were invited to the Davis stampede, we signed up for the 5k; we had never run a 5k or any kind of Ks.
So sticking to the theme we went beyond our previous limits and dove right in.
I think, we were only a week away from the event when we signed up.
No time to have a proper build up or conditioning. Up until that point, I was only training for strength and hypertrophy; cardio was nowhere on the radar. OMG!

The event was Sunday, Tuesday of that week Brian and I decided to run a practice 5k, we setup the route and we went for it.
Luckily, Brian had kept up his cardio game, as for me: that Tuesday was the first in a long time i had ran.
I started great and 10min in my heart and lungs we like “what the fox” then a few more minutes passed and now my legs and core were aching.
Brian was keeping a great pace and would pause to wait for me to catch my breath. Yeah, my conditioning was not there.
We where half done and looked at our time and noticed this was the time of last year’s first place. At this point in time last years 1st place would have already completed the 5k, but as for us?
We still had half to go! yikes.
Over all with was a great initial gauge to see where we were.

Thursday I decided to give it a go by myself, I felt my cardio was doing better even though my legs a core we still sore from Tuesday.
I successfully completed another session. Yay!

Sunday came so soon, I was excited and anxious to see what the event had in store for us. Everyone for the 5k were at the start line ready to go. Bam! The race starts, and sure enough like a stampede, a wave of excitement erupts within the participants and of we went.
I see kids passing me up, and I said to myself “yep they got plenty of energy to burn, it’s ok as long as I keep a good pace for myself and complete this thing, I’ll be ok.”
That was when, I saw even some of our more aged participants passing me!
I was amazed, surprised and Grateful to be witness to such marvel, the young and the elderly joining as one, trying their limits. Such a wonderful sight to see.
After this enjoyment came the heavy breathing, I was wearing earbuds, I could faintly hear myself breathing, of which I knew If I was not wearing the earbuds: I’d be able to hear myself breathing as if I where a train huffing, puffing and chugging along.
“Oh well” I thought.
That’s when I decided to start playing a game. I would Chose someone not to far ahead of me and catch up. I started having fun. After catching up to that person I would chose a different target and replicate the strategy. Huffing and puffing! until the last leg of the race there was a slight incline I really felt that. Oh God!

“Can’t stop got to keep on going.” I told myself. I felt I may have overexerted myself but at this point I was almost done with this thing.
It was now a mind over matter for me at that point. I think I can. Oh yeah!
I saw the finish line “I’m Gonna push myself more, even if I pass out after I cross the finish line, I’m ok with that.”
I crossed and guess what?

I didn’t pass out! Victory!
After all that effort we gathered ourselves and checked out our times. Wow! After less that a week of training my 5k time had improved exponentially. Personal limit shattered!

Never tried tough mudder, now this was our next goal.
I needed to change my training protocol.
What type of training would bring up my level of endurance and usable strength?

Enter Cross fit Workout of the Day(WOD).
I decided to try out these workouts. oh yeah!

Definitely, a change in pace. I had lost agility with just concentrating on muscle building. This would Put me back in my place.
The First few days of this stuff was amazing, cardio and weights fused into one and the circuit type training. I loved it. It was reminiscent of my youthful days in the Marine Corps Junior Reserve Officer Training Corps(JROTC) for my first half of high school and for the other half the California Cadet Corps a flagship youth program of the California National Guard, oh yes I was back in that military life mindset, PT(physical training), Drill sergeants and the works. Yes, The challenge, the obstacles and the victory.
I shared this new discovery of crossfit, with the rest of the crew. They decided to give it a try, so far this has been our prep work for the up and coming event.
So I decided to stick to these Crossfit WODs and I feel a bit more ready for the upcoming Tough Mudder 5k event.
I will follow up with the results.
Remember to:
DU Beyond Limits

DU Beyond Limits Crew| Goes to Race For Autism

Du Beyond Limits Does MudFactor